The best holiday parks in the UK & Europe

This site uses cookies - see our privacy policy. Ads & links in bold may give us a small payment from the seller, at no cost to the buyer. However, this never affects our views - if we like it, we recommend it.

Which Butlins Resort Is Best? Minehead, Skegness Or Bognor? (2022 Guide)

Which Butlins is in the best location?

All three Butlins resorts are alongside the beach. The beaches at Butlins Skegness and Butlins Minehead are sandy whilst the beach at Butlins Bognor Regis is shingle and sand, so less suitable for family sandcastle competitions.

If the beach is the most important thing to you, I'd start by looking at Skegness, which has a massive sandy beach. Be warned though, it takes about three weeks to walk to the water's edge at low tide so swimming requires perseverance.

Which Butlins resort gets the best reviews?

On customer reviews alone, Butlins Skegness and Bognor Regis are tied in first place (as of November 2021).

Butlins Minehead was competing with the others on 4.3/5 on Google Reviews but was behind on TripAdvisor with an average of 3.5/5. TripAdvisor gives ratings in half marks so the difference may not be as significant as it looks. ​

Which Butlins resort is cheapest?

For our price comparison we looked at the cost of a week’s holiday at each Butlins resort for a family of four. We looked for the cheapest accommodation for two adults and two children in a self catering unit which included at least a basic kitchen.

We also looked at the cost of the cheapest buffet accommodation which includes four beds without any self catering facilities, but which gave you breakfast and evening meals out. We didn’t include extras such as activity passes, as there is enough free stuff to do at Butlins if you don't want to fork out.

Of course, this is only a snapshot but my advice would be to check prices at Minehead, Bognor and Skegness if a cheap holiday is the main factor for you.

Which Butlins has the best facilities and activities?

All three Butlins are roughly the same size and the range of activities on offer doesn't vary a huge amount between resorts. They all have a 'Skyline Pavillion' which is a covered area including several attractions.

Unlike Center Parcs, many activities at Butlins are included in the price of your holiday so there's a lower risk of public tantrums when you tell your children they can't do yet another activity because Daddy is getting panicky text messages from his bank...

There are certainly some things you pay extra for, but nowhere near as many as at Center Parcs. Sports like football tournaments and mini fencing are included at all Butlins resorts, as are things like circus skills, tots discos, soft play and some craft activities (see the latest list of included activities on the Butlins website to avoid disappointments/arguments).

Things you pay extra for include minigolf, pottery painting, go-karts, archery, target shooting and bowling. Prices vary, but I wouldn't say they are unreasonable - for example in 2020 it was an extra £5 per person to go to the circus.

If you go for the inclusive dining option then you will probably eat from the buffet which you've paid for rather than eating out at a different restaurant. However, lots of people go for self catering and then eat out on a few nights. All three resorts have five pay-as-you-go restaurants onsite, so there's no notable difference there.​​

Which Butlins has the best swimming pool?

The swimming pools/waterparks at the three Butlins resorts are all called Splash Waterworld. They're all a good size and are included in the cost of your holiday.

The Splash Waterworld at Butlins Skegness is the second newest, having opened in 2013. It's got seven rides and features.

Butlins Minehead has the oldest swimming pool. It's got four rides and features, but it's still a good size.

​Of course, that just tells you the number of features rather than how good they are but it's a useful start. 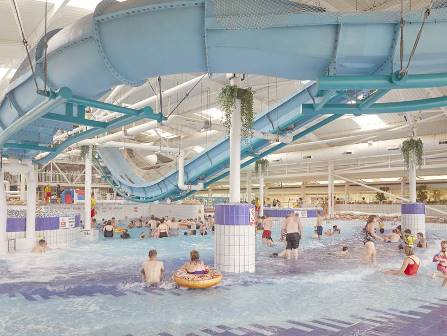 Which Butlins holiday park has the best weather?

Over a year, that means you'll average about 20 minutes extra sunshine per day in Bognor Regis compared to Skegness.

As I said, if you want guaranteed sunshine, try Spain...

Which Butlins holiday park has the best accommodation?

All three Butlins resorts give you a choice of either 'rooms' (i.e. a bed and a bathroom) or an 'apartment' which also includes a kitchen and living area.

If you go for a 'standard apartment' (which is what a lot of people do) then you won't notice a vast difference between Bognor, Skegness or Minehead.

However, there are some differences in the upgrades which are available at each resort. It can be a little confusing, as there are so many options (see our full guide to the different grades). The main differences are:

Other differences between the three Butlins locations

In one case, Butlins Minehead was £200 more expensive than Butlins Bognor.

The difference is sometimes enough to cover the cost of catered breakfast and evening meals for several days, which makes it an easier holiday for whoever does the cooking. As a child, I certainly made the most of the all-you-can-eat buffets at Butlins...

Butlins Skegness has a sandier beach than Butlins Bognor Regis, so it's better for sandcastle building which is surely essential on a British holiday?

Butlins Bognor Regis and Butlins Skegness both have modern waterparks/swimming pool having opened new facilities in 2019 and 2013 respectively.

Butlins Minehead offers a similar range of activities, but it hasn't had as much redevelopment over the years and was a tiny bit behind the other two on customer reviews. However, we did find it was the cheapest for half of our price comparisons so is worth a look for that reason. In some instances it was about £200 cheaper than Butlins Skegness.

Of course, travel time may well be the overriding factor. In our comparisons, a Londoner could save themselves about £80 by driving an extra 90 minutes to Skegness rather than Bognor Regis for a week's holiday in August. But once you've paid for petrol and endured an extra three hours round trip with children in the car, you might conclude it wasn't worth the saving...

Seven of the best alternatives to Butlins

Butlins is a popular choice for an active and affordable family holiday in the UK but it isn't the only option.

2. Parkdean Resorts (60+ locations around the UK)

Other guides from the Holiday Park Guru

Holiday-Park-Guru-Don't-Blame-Us-Disclaimer: All the information on this page is accurate, as far as we know. However, facilities at holiday parks change so please check with the park before booking.
While we endeavour to keep the information up to date and correct, we make no representations or warranties of any kind, express or implied, about the completeness, accuracy, reliability, suitability or availability with respect to the website or the information, products, services, or related graphics contained on the website for any purpose.
© COPYRIGHT 2022. ALL RIGHTS RESERVED.